This might be my favorite post of the year - the medal recap. I know some people don't think that participant medals don't mean anything, but I don't care. I love them. They're fun and they're nice mementos of an athletic achievement, no matter what your race time happened to be. So let's get right in to it, shall we? 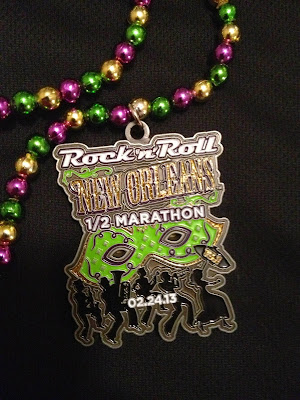 The New Orleans Half was my first "big" race of the season. A huge group of East Nasties converged on New Orleans and pretty much took over. It was awesome and my current PR is from this race. Love the medal - from the Mardi Gras beads to the second line and mask, it's totally New Orleans.  Nice job, Rock n' Roll. 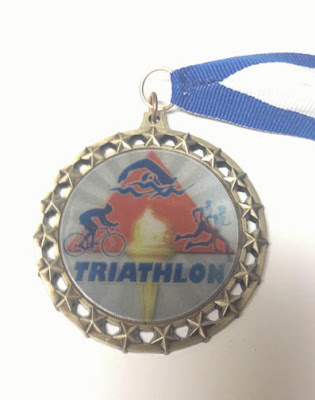 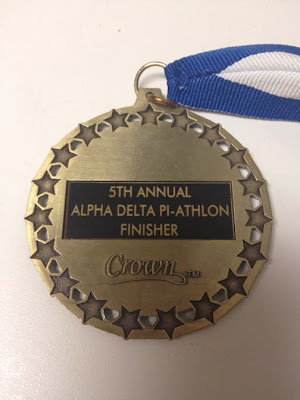 The Alpha Delta Pi-athlon is a local sprint race that serves as the kick-off to triathlon season in Nashville. It's a really fun race, but do I need a medal for a sprint race? Nope. And in my opinion, if a race is going to have a medal, at least have the name of the race on the front of it. Honestly, I wish the race organizers would have just used the money spent on medals and donated that to the Ronald McDonald House, which was the designated charity.
Oak Barrel Half Marathon
April 6, 2013 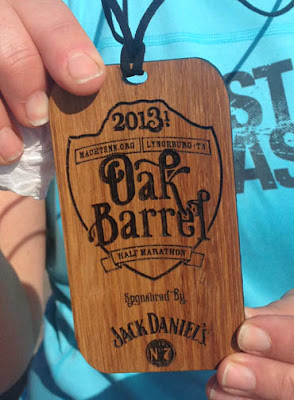 Ok - this is possibly one of the coolest medals ever. It's made from, what else, an oak barrel. Totally fits the Jack Daniel's theme of the race, and it's one of my favorites. If you ever have the chance to do this race, do it. You'll thank me. 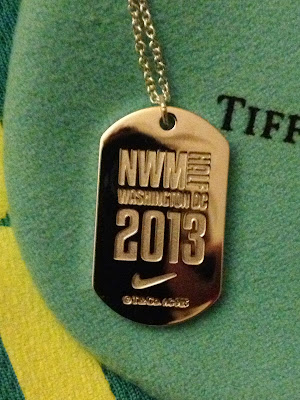 More people probably run this race strictly for the medal that any other race. That's because it's you don't get a medal - you get a necklace. A Tiffany necklace, to be exact. And it's presented to you by handsome young men in tuxedos. Nice touch, Nike. The necklace is very cool, but I don't really wear it very much. But since I guess you don't really wear race medals in general, it's not much different from a regular medal in that sense. It's just smaller...and from Tiffany. 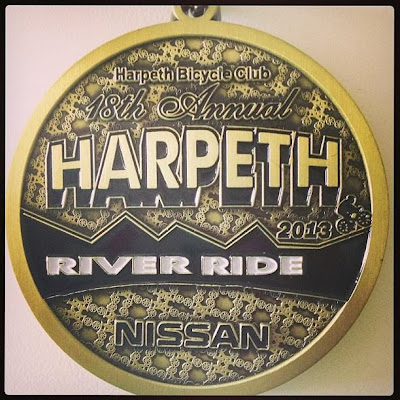 Unfortunately, the Tiffany necklace wasn't the only thing I brought back from the Nike Half Marathon. I also came home with a sprained ankle. So, I was pretty much limited to cycling for a few weeks, which is why I signed up for the Harpeth River Ride metric century. I've done this ride several times, but not for the past few years. I don't know if the medal is a totally new thing, but I had never received one previously.  I like it. It's a really nice, high-quality medal and was a nice touch since the ride was really hard! 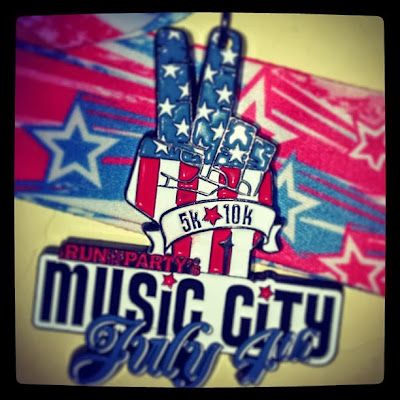 The July 4 5k was the first post-sprained ankle race for me. I was so happy to be out there, I didn't care that it was raining the entire time. And just check out that medal. Again, I don't think medals are really necessary for 5k / 10k, but I'll take it when they're this cool. I found out later that my friend, and fellow East Nasty, Meg designed it. Great job, Meg. 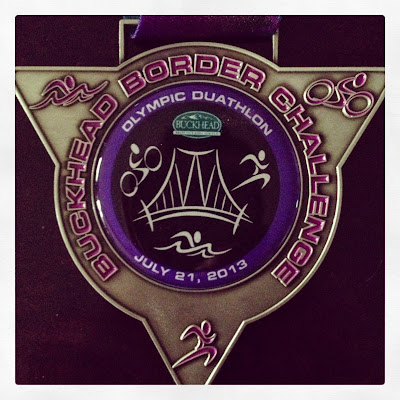 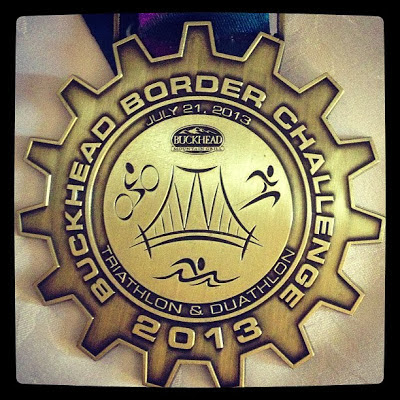 I actually got TWO medals from this race. The first one is the regular finisher's medal, which actually had to be mailed to me because someone STOLE all of the medals right before the race.  Who does that? Anyway, the second medal is my 1st place AG for the Duathlon. I like both of these.  They had nice ribbons and were both unique, but still similar enough that you could tell they were from the same race. 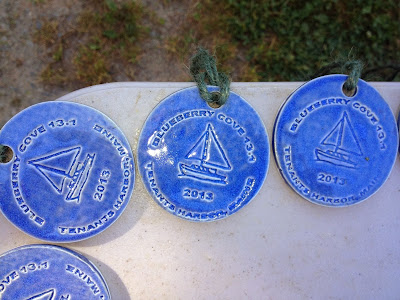 Unfortunately, I didn't actually earn one of these beauties, but I was signed up and was there for the race, so I'm including them. This was a race I had to pull out of due to a re-spraining of my ankle. But look how cool these are! A local artisan donated them.  SO freakin' cool. 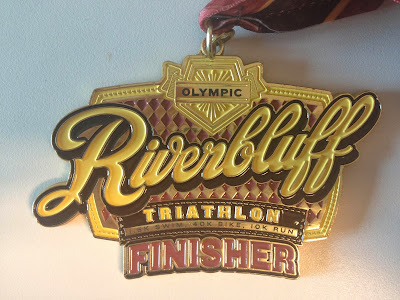 I really liked this medal. Distinct design, quality ribbon (I should probably start including those in my photo, huh?) and it was heavy. One of those medals that makes you feel like you accomplished something. 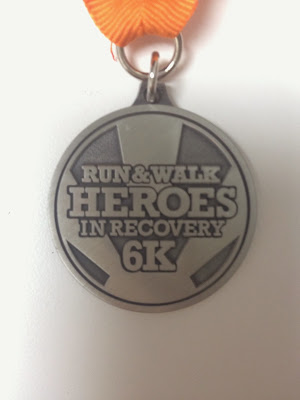 This is another medal that falls into the "not necessary, but a nice touch" category. The race is 6k, which is a unique distance, so it's nice to have something to remember it by. But this race also supports people who are recovering from addiction, some of who probably never thought they would be able to run a mile, forget about a 6k. This was a nice way to congratulate those "heroes" on their accomplishments on and off the race course. The ribbon had the date and place of the race (again- I really need to take a photo of the ribbons!). 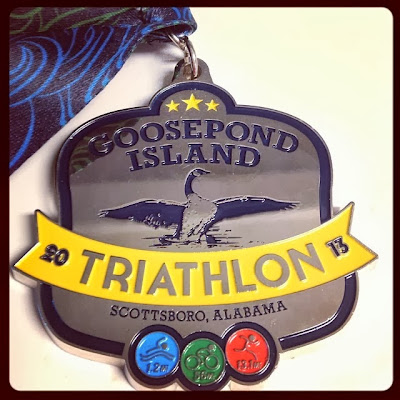 Another unique medal. I like the engraved goose. Would have been nice to have a date on it, but that's Ok. Ribbon was pretty, too.  You can see a little bit of it on the top left corner. I was a little worried that since this was a local race, that the medal would be cheap - but it wasn't.  Nice job, Goosepond. 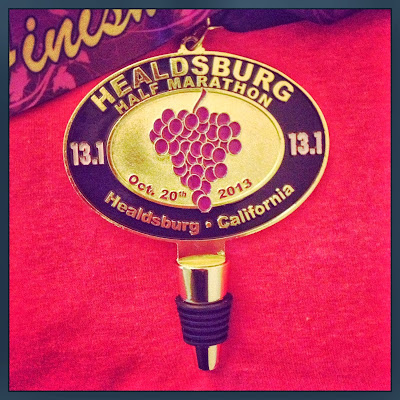 This is probably the most multifunctional medal I've ever received. It's a medal AND A wine-stopper! Pretty cool, eh? It was also really colorful with the grapes and the wine-colored ribbon. It was also the largest medal I received this year.  Love it. 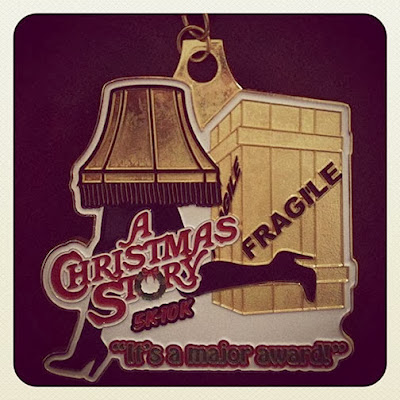 This was a virtual race that I signed up for strictly for the medal. I mean, come on - it's amazing. If you have ever seen "A Christmas Story," you'll think this is hysterical.

Posted by myllstogo at 7:33 AM